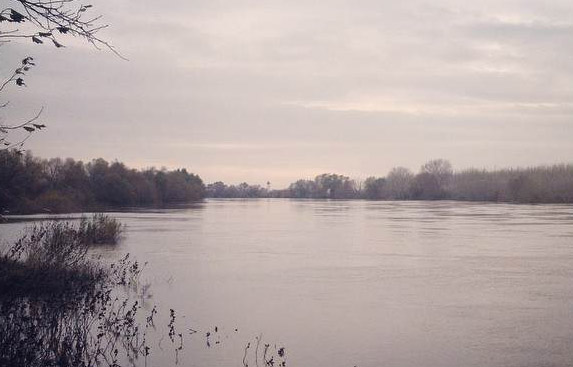 Maritsa (Марица, in Bulgarian) or Evros (Έβρος, in Greek) or Meriç (in Turkish) is one of the biggest rivers of the Balkans. It crosses Bulgaria and reaches its mouth, after a journey of 480 kilometers, at the Aegean Sea near the presently Turkish city of Enez. In its lower part it forms the borderline, for a few kilometers, between Bulgaria (North bank) and Greece (South bank), and after having crossed the city of Edirne (Turkey) it marks the boundary between Turkey (East bank) and Greece (West bank).

Some rivers are famous, for Great History: the history of civilization, battles, cities. But every river is a repository of an infinite weave of stories. Those who live near a river see it as a mentor, an encyclopedia, a compass. Rivers have such a special place in literature and in imaginaries at all latitudes that it is impossible to cite examples without getting mired in overly banal, useless partiality (from fables, myths, legends, all the way to the modern novel).

The Evros, in its final portion, has marked a borderline for almost 100 years. In way of dividing territory and dividing itself, its history and its stories have been transformed, perhaps even more than it is possible to imagine today.

This river and this boundary have narrated the story of a coerced separation, of expulsions, deportations, persecutions, for decades; the consequences of the idea that says reality should adapt to a sign drawn on a map.

When does the history of a border river stop being the temporal progress that flows vertically with or against the current? How does this history become the narration of its crossing, taking a horizontal direction?

The Evros-Meriç found its way back into the headlines when thousands of women and men, on a journey or in flight (from Asia and Africa) began to cross the river, the leave their places of origin and enter Europe. Following the news, the story of the Evros becomes juridical history, a story of walls to erect or barriers to excavate, of surveillance and control, of the European Union, border police, deaths, detention centers, lawyers, activists, charges, sentences. With Conrad, we might say of moralization and jurisdiction.

The history of rivers, on close examination, is always a story without idyll.

A place, and a border zone in particular, a voyage, a crossing, an in situ research project, impose the taking of a position, the definition of a vantage point that relegates impartiality to a necessarily marginal role, making the indefinable value of experience burst into the longed-for fiction of the hyperbaric chamber of the objectivity of knowledge. In situ, rhetoric and proof are inexorably linked.

So initial questions like «What is a borderline?», «What happens on this borderline?», «How is it possible to read it and define it?», «What stories and which History does this river tell?» have the possibility of transforming into living, embodied questions and hypotheses, where the new empires of East and West meet and clash, like the currents of two seas.

The Evros is not the Congo of Heart of Darkness, yet the last dazed words uttered by Kurtz, twice, under his breath, that “cry that was no more than a breath” directed at who knows what “image, what vision,” accompany us along all the rivers where the delusions of omnipotent grandeur of so-called Western man never cease to impose and defend his so-called civilization: «The horror! The horror!».