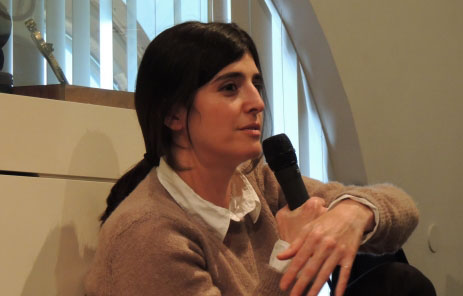 Thea Djordjadze, born in 1971 in Tblisi, Georgia, lives in Berlin. After studying at Academia of Arts in Tblisi and the Gerrit Rietveld Akademie in Amsterdam, she compiled her studies at Staatliche Kunstakademie Düsseldorf with Professors Rosemarie Trockel and Dieter Krieg. She has been a member of the artist group hobbypopMUSEUM, an artist-run space in Düsseldorf. She has had solo exhibitions at MIT, Cambridge (2014), Kölnischer Kunstverein (2013), Malmö Konstmuseum (2012), Kunsthalle Basel (2009), the Kunstverein Nürnberg (2008), Studio Voltaire, London (2007), and the Bonner Kunstverein (2001) among others. She has participated in the documenta 13 (2012), Georgian Pavillon, La Biennale di Venezia (2013), Berlin Biennale (2008) and the Biennale de Lyon (2007).