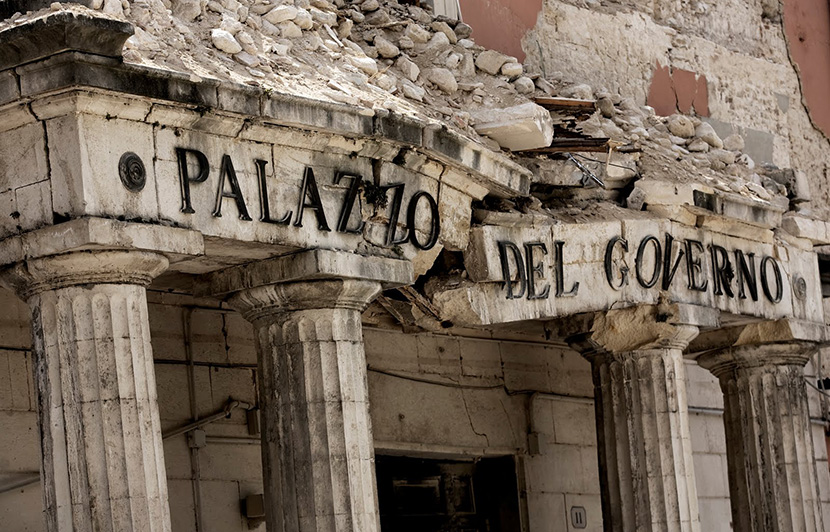 Rules and practices in an earthquake

Research amidst the ruins of L’Aquila, a city struck by a strong earthquake in 2009, offers a way to explore the decision-making, anthropological and social crisis of our society, which we would like to investigate first of all by approaching the social actors in their territorial and local context. Direct research allows us to observe social practices in a productive way, beyond abstract and formal description, beyond prescriptive norms and rules. It permits us to observe the actors in their relational field, making formal and informal ties an integral part of the study. The density and intensity offered by this experience lays the groundwork for reinvention of research practices through a productive intertwining of heterogeneous knowledges, where art opens to the hybrid and flexible potential of experimentation. Where the concrete character of social issues grasps artistic activity and research.

The program is organized in two parts. On the one hand, a series of encounters with cultural associations of the territory and discussions focusing mainly on the narrations of the earthquake told by voices from inside (anthropological, legal, pedagogical, geographical narration, etc.). On the other, research on the artistic production of the territory, investigated in a way that is neither hierarchical nor systematic, outside of pre-set critical and/or qualitative positions. The idea is to gather, in a given time, in a given situation, all the material the local community is willing to grant to our staff under the status of “art.” A project driven by open, uninfluenced curiosity regarding everything that happens, outside of the predetermined schemes in which both the contemporary art system and academic research have been rigidly channeled. A research that asserts the prime importance of reality over the prejudices of selection of the contemporary artistic and academic systems, all too often closed inside circuits of meaning and practice that are very deep, but extremely narrow.

Visit of the city center of L’Aquila

Visit of the territory

- meeting with some organizations of the territory

Meeting with some organizations of the territory